Memorable scenes of the crime

When I learned that my friends over at Furious Cinema were co-hosting a blogathon titled, Scenes of the Crime, I thought of five or six films instantly that I wanted to write about and submit as entries.  Crime films have been popular with audiences throughout the history of film and it is one of my favorite genres.  However, since that day there were also specific scenes of crime in film that I couldn’t quite let go of.  So, I thought, as a means of getting those scenes out of my head so I can move on to the task at hand, I’d submit my first entry to the Scenes of the Crime event as a list of some of the memorable scenes forever etched in my mind. 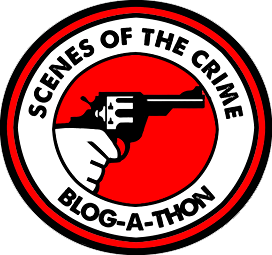 As you’ll see from the list, included are scenes of “traditional” crime movies, which follow the crime genre specifics – organized crime or cops and robbers, etc.  However, I was also compelled to include a couple of scenes from films that fall outside the “crime” genre because the scenes themselves are of crimes.  To me, memorable crimes.  Let me know your views on that.

Please keep two things in mind before you move on – one, I included only scenes of “modern” films, none of the classics (with one exception) – and two, these are all spoilers so if you prefer surprises and haven’t seen any of these films, do not read on.

And now, in no particular order…my memorable scenes of crimes…

As Bonnie and Clyde (Warren Beatty and Faye Dunaway) the young, notorious couple drive down the road laughing, an old man flags them down because he needs roadside assistance.  Or so they think.  As Clyde goes out to meet the man a truck is seen driving toward them, suddenly a flock of birds flies out of a tree and the old man scurries to hide under his truck while Clyde is distracted.  Something’s definitely wrong.  From within the trees and shrubs a barrage of gunfire aimed toward the couple springs out – Clyde’s outside and Bonnie’s still in the car.  That’s where they die.  A shocking scene when the film was first released as this type of graphic violence had never been depicted in film before, it’s still affecting and beautifully shot.  It’s not likely to be forgotten, this extreme violence as art. 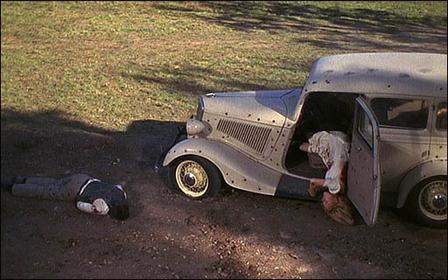 I did a previous post where I commented on this film and scene and you can take a look at it here if you’d like.

“What draws my admiration?  What is that which brings me joy?” Baseball!”  Then Robert DeNiro, playing Al Capone in this De Palma film, picks up a bat to talk about the importance of teamwork in America’s pastime.  He’s talking at a gathering of his team, a banquet with the thugs who go out and do his bidding.  And, now and again, dare betray him.  As he speaks he walks around the banquet table and stops behind one of those men.  Then proceeds to bash the man’s head in with the baseball bat, crushing his skull and spoiling everyone’s appetite and the linen. 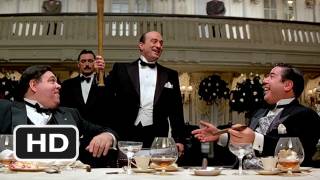 There’s just something about a scene during which someone’s head is bashed in with a baseball bat that is hard to forget.  In an episode of the HBO series, Boardwalk Empire, Gyp Rosetti, an unscrupolous not-quite-sane character played brilliantly by Bobby Cannavale ended one of his men’s lives in this manner.  It aired only a couple of weeks ago and as I watched in horror, the DeNiro scene came to mind.  Not surprisingly the Boardwalk Empire scene was even more graphic and disturbing than the one in The Untouchables.  Shocking even by today’s standards.  So, as far as television crime scenes go, a definite one worthy of mention here.  Absolutely sickening.

Poor Spider is limping around with a big bandage on his foot after being shot in the foot by Tommy (Joe Pesci).  For fun.  Then during another card game where the wise guys meet to pass the time, Tommy picks on the kid again.  But this time Spider talks back, “Why don’t you go f–k yourself, Tommy?”  All the goodfellas chime in, laughing that the kid has some gumption.  Loudest of all is Jimmy Conway (Robert DeNiro) who busts Tommy’s chops about letting the kid get away with it.  All in good fun.  So, without warning, the short-fused Tommy fires six shots into Spider’s chest and kills him. It was a sick, sudden, casual and unnecessary murder.  Just for kicks.  And while I can take most of all mob hits I’ve seen on-screen, including the many violent scenes in this film alone, this one is hard to swallow.  Yeah, Tommy’s a sick maniac and deserves everything he gets. 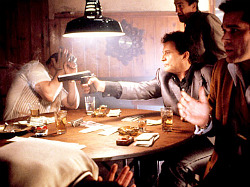 If you’ve seen the Godfather films you know this act, depicted in Godfather II without blood and in a scene where we don’t see neither murderer or victim clearly or up close.  Yet, as we’ve come to know this family and its story and recognize those words being spoken, the scene becomes extremely disturbing.  A single shot, the site of a man through a window, a seagull, slight waves of the long island sound and small boat rocking while familiar music plays softly.  My God how low this man has come.  The one who ordered this act and the one who will forever bear the weight of it. 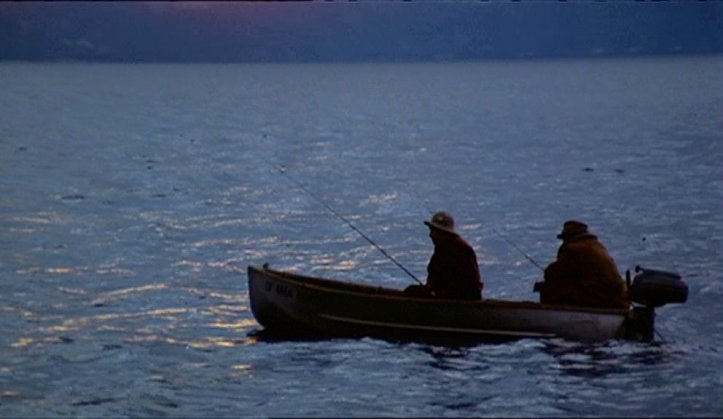 Here is the classic film exception.  Just one although I love classic gangster films and am a huge fan of all mysteries and…well, basically, I love all criminals and their machinations.  But Psycho is listed here for fun and because it has, arguably, the most famous crime scene in the history of film.

Marion Crane (Janet Leigh) checked into the Bates Motel earlier that day.  She’s tired and prepares to shower, settling in for the night.  She steps into the shower, unwraps the bar of soap, turns on the water – a quick reminder to us from Hitchcock that it could be us in that shower with a signature Point-of-view (POV) shot as if we were in the shower ourselves – we hear nothing but the water.  Then the door opens and we can a shadow through the curtain.  It looks like a woman – getting closer.  THEN as the shower is abruptly opened, a raised hand holding a huge knife and the shrill, unforgettable sound of that music.  Close-up, stab, close-up, stab.  Over and over and over again.  Until it ends.  The music stops and we are left to contemplate what just happened.  Slowly.  Methodically.  Pure cinema. 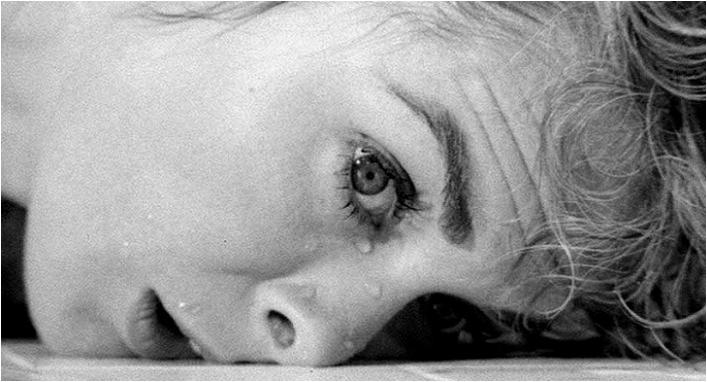 By the time this scene takes place we know all about what Dr. Lecter is capable of.  But we haven’t seen him in action.

He is imprisoned in the Shelby County Courthouse, a stronghold surrounded by police.  It’s really an impressive set-up, testament to the infamous power of this one man – a massive temporary iron cage has been erected, cordoned off by police barricades.  At the moment, Lecter is listening to classical music sitting very comfortably.  His dinner, “lamb chops, extra rare” is brought to him by two guards.  As he nears the bars to prepare for his required handcuffs, we see he’s had something up his sleeve – or rather, in his mouth – a means to undo the handcuffs and he does so rather easily.  So, we know what happens to the guards, they cease to live.  But the how is quite chilling.  One of the two men gets part of his face bitten off, the Doctor’s special talent, leaving him writhing in pain so Lector could go dispose of the second guard who he, ever so slowly beats  to a pulp with a riot baton in that ever-affecting POV shot that shows the scene as if he’s beating me to a pulp.  His face smeared with the blood of the guy he bit and the piano plays on.  Not enjoyable.  And yet, very much so.  I hope that’s not the sign of a sick mind. 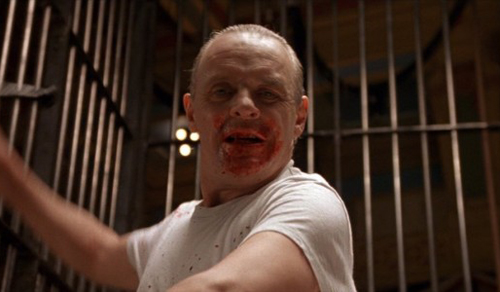 The next scene, the result of the doctor’s handiwork is also quite shocking.

As Santino’s car drives up to that toll there’s dead silence.  He hands the clerk the toll and the car in front of him moves back to block him in, simultaneously the toll clerk drops a coin and disappears from sight.  This doesn’t look good.  And the barrage of bullets start pounding into him.  Riddled with bullets he finally falls.  Then they kick him in the face.  Despite his hot temper he doesn’t deserve this.  The greatest miracle of The Godfather is the fact that Francis Ford Coppola somehow makes us learn to love these men of crime.  “Look what they done to my boy.”  I am sorry to lose Sonny and angry and shocked at this extreme disrespect. 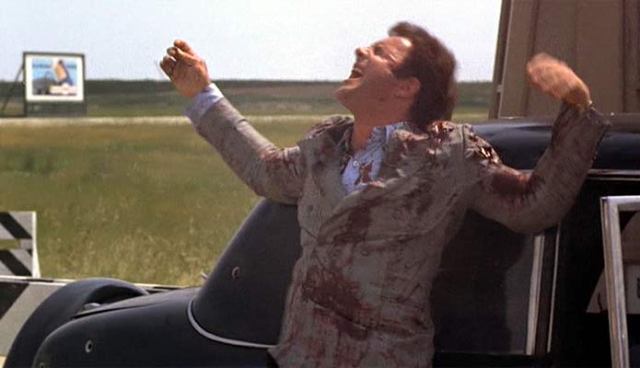 Of the seven deadly sins there are two sins to go and we get to see them before our eyes.  A shocking ending to a great film.  Disturbing simply doesn’t cover it and I am not explaining anything else in this scene or the box.  Unforgettable.  This one gave me nightmares.

“It seems that envy is my sin.”

Somewhat of a controversial film, certainly a controversial topic, it’s about two brothers and racial hatred.  A violent film throughout, the most brutal scene is perhaps the most disturbing I’ve ever seen in a film – it’s extremely painful to watch and causes uncontrollable fidgeting, to say the least.

Derek (Edward Norton) assaults two black gang members who he catches trying to break into a truck his father left him.  He shoots one of the two, sadly a compassionate act compared to what’s in store for the other whom Derek forces to bite down on the sidewalk curb and then stomps on his head.  And we hear bones crush.  It’s a vicious act not easily forgotten that I felt down to my toes.  What kind of man comes up with something like this? 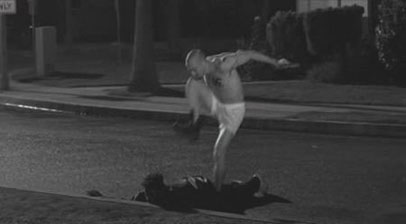 To round out the list to an even ten mentions, I am going to one of the most brilliant film montages ever to appear on film.  Back to The Godfather I go and the magnificent baptism murders montage.  Michael Corleone is marking his territory as the undisputed boss of bosses of New York’s crime families – the Capo di tutti capi.  His sister Connie has asked him to be godfather to her son, Michael Francis and while the godfather renounces Satan and all his works, the gangster’s army is blasting away at his enemies.  Even after watching this film numerous times this never ceases to chill one down to the bone while also being in awe of brilliant filmmaking.  Themes Coppola uses beautifully, the contrast between religion and violence has never been done better (although we saw it above with the “Hail Mary” scene as well).  One for the ages in one of the greatest films ever made. 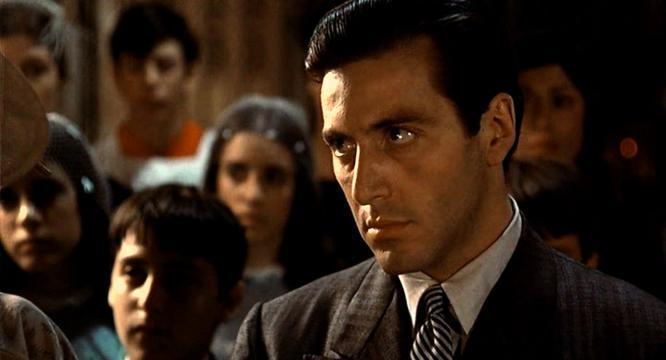 There you have them – just a few scenes of the crime that are unforgettable to me.  Now that I whet my crime appetite I can concentrate on a few films in their entirety, one at a time.  I have some wonderful films in mind to concentrate on, none of which are mentioned here and I hope to do them justice.

To read a lot more about crime in film, please go to one of the host sites for this great blogathon event – Furious Cinema, Criminal Movies, and Seetimaar – Diary of a Movie Lover.  It’s a guarantee you will find enjoyment even if in the underbelly of society within the many more entries about Scenes of the Crime.