Let’s get right to it so you can clear your DVRs – here is the schedule for the getTV Lucy tribute this Thursday:

Lucy plays her slapstick to the hilt in this movie and with Eddie Albert at her side she creates chaos at very possible turn. Throw in a murder and you have all the makings for madcap humor at its best.

Lucy is more low-key in this outing, but her blazing self still shines in this comedy about a wife, her husband and some embalming fluid.

Miss Grant takes Richmond, Lucy get mixed up with James Gleason and Frank McHugh as the unwitting secretary for their crooked practice – throw William Holden in to save the day, and you have the makings of a great character comedy.

Arabian Nights-type of tale stars Agar as a deposed prince trying to free his people from the evil rule of the caliph, the princess Narah (Lucille Ball) and his vizier, played by Burr. Agar enlists the aid of harem girl Patricia Medina and together they win back the province, while zipping around on a flying carpet.     Cast: Lucille Ball, John Agar, Patricia Medina, George Tobias, Raymond Burr, Gregory Gay, Rick Vallin, Lew Landers.

THE MAGIC CARPET brings you Lucy in color and as the villainess.  How could one possibly resist?  She goes way out of “character” in relation to the Lucy we know and love today. It is worth the time to see her stretch her acting horizons. Of course, Lucy’s diversity was one of her truly amazing gifts. 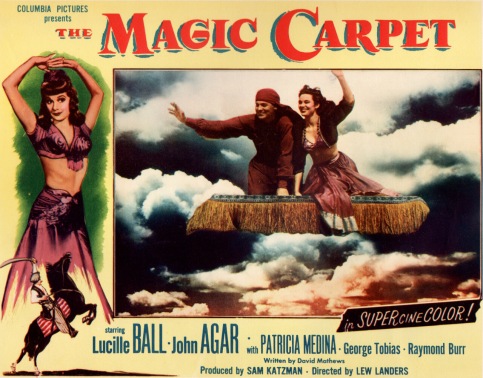 Lucy was an underrated film actress, appearing in films ranging from comedy (of course)…to even horror (LURED with Boris Karloff) . My favorite of her films  is FIVE CAME BACK in which she works well with Chester Morris and speaks one of the great lines in film history.  Lucy never quite found her “niche” in the movies as she did on television.  However she gave some very memorable performances and had a substantial film before changing mediums and hitting the stratosphere as Mrs. Ricardo.  The films noted above represent just a sample of her work from 1947 to 1951.  And, if I may say, there are also many other high quality character actors to support in these four films.  Please tune in and wish Lucy a happy 103rd birthday.