#TCM – Medaska’s Pick of the Week

Hello all, I hope June has started out well for everyone.  This week my choice for TCM pick of 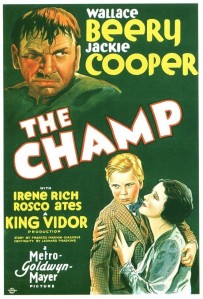 THE CHAMP has some of the greatest chemistry of all time, with Wallace Beery and Jackie Cooper (who was just about 9 at the time of filming, amazing).  Although their relationship off-screen was not the greatest, according to Mr. Cooper, their ability to share a scene in this movie was truE “movie magic”.  This being close to father’s day, and the theme for the night of June 14 on TCM is fathers and sons, it is a truly great film to kick it off.  Beery and Cooper really do bond like a father and son who would be living on the bad side of town.  It is heart warming and sad at the same time to see how Cooper as the little boy is the man in the relationship and takes care of his dad when he comes home drunk, which is just about every night.

Jackie, who plays Dink in the film, has his routine all set, for his father “The Champ”,  as he stumbles in each and every night.  Dink’s devotion to The Champ can be seen in his eyes, which signifies a great performance by any actor.  You lose yourself in the fact that it is a film, it feels more like we are peering in on these two outcasts, and that fact alone makes it a wonder to behold.  The one simple scene that stands out to me is when they are walking together, and The 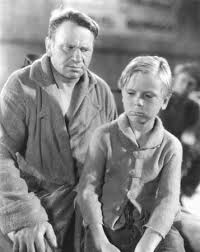 Champ is trying to explain to Dink what they are going to do next, and how he will take care of everything for them both.  Wallace Beery does a small but huge acting move in the scene.  As they walk delivering their dialog, Beery takes Jackie Cooper’s hand, as a real father would do when trying to make his son feel rest assured.   It is a very simple but powerful tool he uses to create a bond between him his son – and us.  Most actors today use movement after their dialog is done, not during.  Brando does the same thing in ON THE WATERFRONT when he picks up Eve Marie Saint’s glove and puts it on while talking to her.  It is a small thing, but speaks volumes about the character.  The Champ really does care about Dink, but he just can’t help acting the way he does.  How many of us have seen this all too human flaw in real life?  This bonds you with the characters from that moment on, and you emotionally invest in them for the rest of the film.  It is raw, which in turn makes it that more emotional at the end.

If you want to watch a film that makes you feel it in the gut, please check out this week’s pick, THE CHAMP, which (again) airs on June 14 at 8pm on TCM.

Till next week, this is Rob Medaska saying thank you so much.